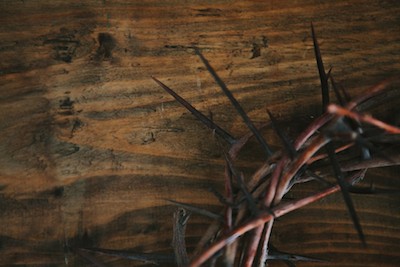 I’ve got a problem with most books on masculinity. Actually, I can think of three:

And when I read books on traditional gender roles in marriage that talk about how men shouldn’t become too much involved in child rearing because it might lead to “role confusion” I get a little bit sick in the stomach.

But luckily I don’t need to chop firewood with my bare hands to be a strong man, at least according to Swiss theologian Karl Barth.

Barth points out that according to the Bible, the true strong man is not a muscular, domineering tyrant. He is, simply, the man conscious of his responsibilities and prepared to fulfil them (Church Dogmatics, Book III.4.176-177).

Husbands, love your wives, as Christ loved the church and gave himself up for her…

This is costly, sacrificial love. Being a strong man is all responsibility and no rights. As C.S Lewis put it, wives need not begrudge the “crown” given to husbands here, for it is a crown of thorns (C.S. Lewis, The Four Loves).

Can’t a wife do these things too? Of course. Men and women are not opposites. But here in Scripture God seems to look husbands in the eye in a special way: “if your family’s spiritual life could be better then I’m looking at you to fix it” – “if your relationship has broken down then I’m looking at you to make the first move to seek forgiveness regardless of who is most at fault.”

The wife’s corresponding calling is to empower him to be that kind of husband (which I take it can never mean passively acquiescing to his sin). I don’t think this determines who should raise the children or who should earn the crust. When my wife and I first got married I was a kept man as she worked full time and I studied. Was she less feminine for being the breadwinner? Not if the examples of femininity in scripture are anything to go by. The woman in Proverbs 31 is praised for her skill as breadwinner, agribusiness owner and real estate mogul. Paul’s ministry is supported by Lydia, a successful high end fabric trader. Tell the Old Testament prophetess and judge Deborah that girls can’t be leaders and she’ll chase you and your army all the way back to Mount Tabor.

I can’t do anything about my sporting aptitude. My close combat skills will be a liability in a Zombie apocalypse. But by God’s grace I can recognise the things about being a man which are actually important. Even I can be a strong man.