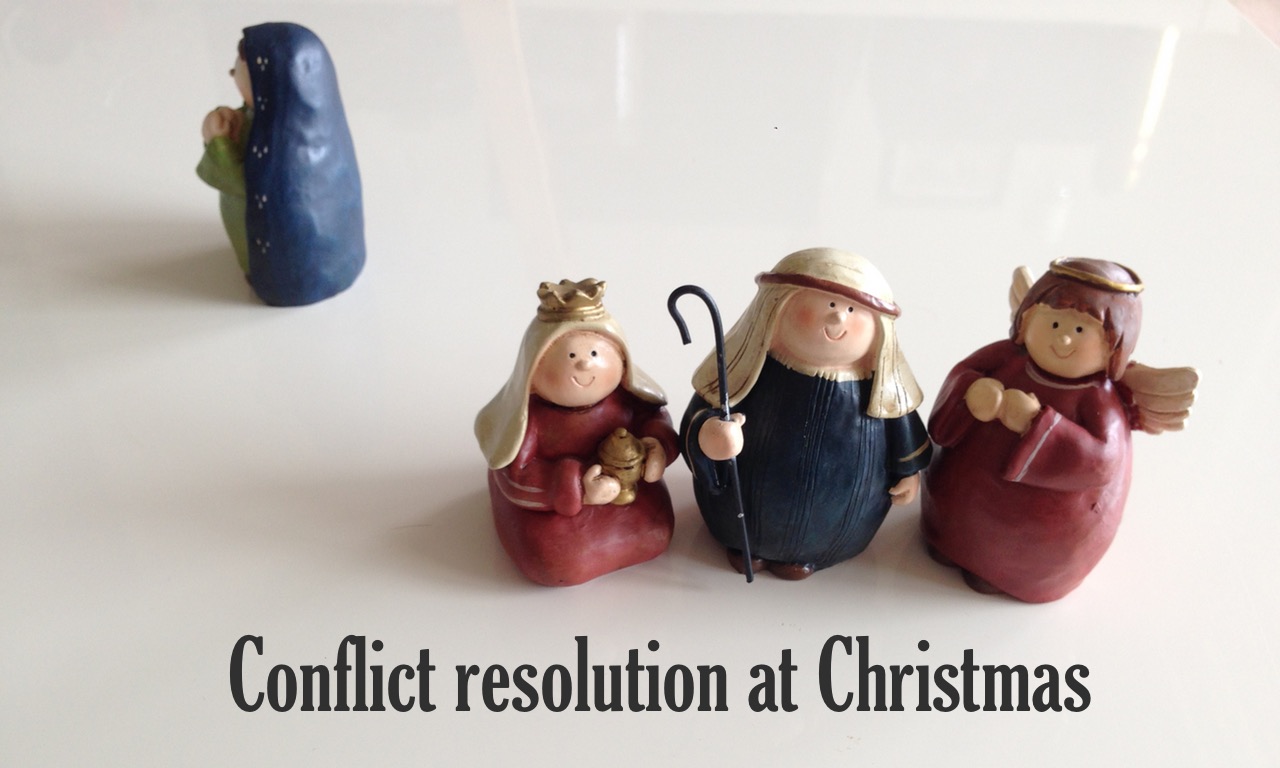 In a classic 1997 episode of Seinfeld, George Costanza receives a card at Christmas time from his father which says “Happy Festivus”. Jerry and Elaine force him to explain that his father invented a holiday for their family called “Festivus”. As a secular Jewish man he wanted to experience all the main features of Christmas, but in a less commercialised, less religious way. And so he invented Festivus: a Festivus for the rest of us! Festivus traditions include the “Festivus Pole” (a bare aluminum stick), and the “Feats of Strength” (in which the head of the household wrestles each challenger to the floor).

But one of the most important traditions of Festivus is the “Airing of Grievances”. Immediately after the Festivus Meal is served, each member of the family takes turns explaining how everyone else has disappointed them in the previous year.

Sadly, this parody is not far from the truth for many families at Christmas. We know that family conflicts of all sorts spike at Christmas.

On Sunday at Barneys I spoke on the subject conflict resolution at Christmas (the recording is available here). As promised, here are some further resources for helping us deal with conflict in a way that brings glory to God.

UPDATE 21 DEC 2015: a friend has written an excellent complement for this piece providing specific help for victims of family and domestic violence.

The main insight of Ken Sande’s book The Peacemaker is that conflict can be an opportunity to glorify God. An Australian group called Peacewise has taken these peacemaking principles and run with them, offering counselling, resources and training in conflict resolution from a Christian perspective.

This approach to conflict resolution is based around four Gs.

Conflict is never fun, but it is not necessarily destructive. So don’t waste a conflict. Every conflict can be seen as an opportunity to bring honour to God by revealing the reconciling love of Jesus Christ.

Often people expect conflicts should not happen in Christian churches or families, but the Bible expects conflicts to arise. Conflict is not a sign of defeat, it is an opportunity for godliness.

Approaches to conflict range from “Peace-Faking” (avoiding the issue and pretending nothing is wrong) to “Peace-Breaking” (aggressive actions designed to attack and harm the other, or “win” the conflict”). Both approaches are sub-Christian.

As we follow God’s example and commands then whether the conflict is resolved or not, we bring him glory. The first step should be to ask God “how can I please and honour you in this situation?”

Before attempting to address the other person’s behaviour, it is important to discern and confess the things we have done to contribute to the problem. Because “sorry” is such a weak and ambivalent word, we need scaffolding to help us apologise well. Here is one approach which he calls “the seven As”:

If someone’s sin is too serious to overlook, it may be necessary to speak to that person about it. However, this should be done carefully, and (at first) in private. Sande has some useful questions to ask before attempting this:

4. Go and be reconciled

“Forgiveness can be extremely costly, but if you believe in Jesus, you have more than enough to make these payments.” (Sande, The Peacemaker, chapter 10)

When forgiving someone, it’s a good idea to avoid the kneejerk reaction of saying “Oh, it’s okay, don’t worry about it”. We say this perhaps to protect ourselves from admitting that we were vulnerable, or because it’s awkward to know what to say. But don’t say “it’s okay”, because it’s not okay. If I thought it was okay I wouldn’t be asking for forgiveness – pretending it wasn’t that bad doesn’t help either of us. What you mean is “Yes, it was wrong what you did, it really hurt me, but I forgive you.”

The agreement to forgive means not treating the wrongdoer as their sins deserve. In forgiving you I am giving up the right to use the wrong against you. I recommend actually saying the words “ I forgive you”, which is really an implicit promise that:

I found Sande’s analysis of underlying desires very helpful. It does seem as though most conflicts arise because of deep desires, which are sometimes unspoken, and sometimes even unconscious.

John Gottman’s work on marital stability and predicting divorce is actually designed for marriage counselling, but I’ve found the principles relevant to almost every relationship. His great insight is that it is not whether people have conflict but how they deal with it that destroys relationships.

By way of summary of his material, here is my list of “relationship killers”. If you want to destroy your relationships, try approaching conflict like this:

On the receiving end of this, when we experience harsh start up, criticism in absolutes and contempt for us as people, our bodies respond to the feeling of being overwhelmed by trying to protect us. This is called “flooding” and often brings with it quicker pulse, raised blood pressure, and an inability to think empathetically or creatively (perfect for a relationship-ruining discussion). At this point your options are limited to the most primate options of fight or flight:

From here on in, the best way to nail the coffin of a relationship is to get in a death spiral. There are three

A lot of counsellors and pastors use Family Systems Theory to understand our behaviour in light of our family.

A key insight of this approach is that sometimes as individuals our behaviour and emotions have less to do with what’s going on for us, and too much to do with trying to restore harmony to a system around us. The older sibling is always anxious to keep everyone happy, the youngest child always feels ignored and patronised and so withdraws – that kind of thing. We need to work hard at understanding those systems and grow in our differentiation (that is, our ability to be around our family, emotionally engaged with our family, but still in control of our feelings and choices).

“The ability to be in emotional contact with others yet still autonomous in one’s own emotional functioning is the essence of the concept of differentiation.” (Kerr & Bowen. 1988).

The Australian Family Systems Institute has a really helpful page on how to approach family gatherings. Such gatherings can be seen as an opportunity to observe learn about yourself and others without reacting. Normally the more information and experience you have about other people the easier it is to move past hurts, which means family gatherings are a good opportunity to spend time with relatives without an agenda, to learn about them as individuals and about how you all relate together. Apparently the standard advice is to try to spend as much time with your family as you can while staying generous towards them.

An attitude of trying to understand rather than react can be a lifesaver at family gatherings. See if you can pick up on common themes – who fills what roles? How do the different siblings relate to each parent? Who is in the loop, who is on the outer? How do things change when this person arrives? How do you fit in, what is your standard role? The goal is to understand rather than react.

Family Systems theory also helps us to see the wisdom in Jesus’ command to begin addressing a conflict by involving as few people in the process as possible:

“If your brother or sister sins, go and point out their fault, just between the two of you. If they listen to you, you have won them over.(Matt. 18:15)

Involving third parties in a conflict too soon often multiplies the problem, exponentially complicating the relational system, raising anxiety levels for everyone and reinforcing undifferentiated patterns of behaviour.

The guide to family gatherings mentioned above recommends having a script ready to go for when one relative tries to complain about another relative.

Please note: confronting a person directly will not always be appropriate where there is a significant power imbalance, or a pattern of power and control. In these cases I recommend speaking to a pastor on your own to discuss a plan to deal with the conflict.

I hope the tools above are interesting and helpful. However if you are in the midst of a serious conflict I recommend getting help.

A good local church pastor who is experienced and wise is a great place to start. Make a time with your pastor to speak about your problems. You might do this alone at first, or (if it is safe and appropriate) together with the person/people involved in the conflict. Where the situation is beyond their capacity they will be able to refer you to a specialist counsellor, psychologist or mediator, and continue to provide prayer and pastoral care through the process.

If your situation involves family violence

UPDATE 21 DEC 2015: a friend has written an excellent complement for this piece providing specific help for victims of family and domestic violence.

Police: If domestic or family violence is occurring now or there is an immediate fear it is about to happen, it should be treated as an emergency by calling 000.

Domestic Violence Line – 1800 65 64 63
NSW – A 24hr – 7 days a week telephone support.  Assistance and referral line for all victims of family violence in emergency